Buckley presented her certificate of authority to collect sales tax and explained her right to sell expressive matter in the park to Myer, thinking this would clear it up.  Myer was not interested, and told Buckley that her rights didn't apply in this particular park.  I started taking video.  Myer claimed that the private laws of the park (Myer said "our park") supersede the relevant city and state laws (go to :50 of the above video).  Buckley asked if these private laws were imposed over Constitutional Law, at which time Myer stammered, refused to answer the question, and pointed out she's not a lawyer. The video above was shot from my phone. It's shaky at first because I was shaking - Myer and Sandgrund were belligerent.  The video gets steady in about a minute in.  We weren't expecting to be stopped from selling art in a public park.  It's legal and common.  We've shown artwork in lots of New York City parks and on the street, especially since Buckley (my wife) lost a lot of freelance work with the magazine crash.  This is a vital job for her and for us.

Not long after our rights to sell expressive matter on public property were put on hold by Myer and Sandgrund, a security team from Parks Enforcement Patrol (PEP) showed up to remove us.  Buckley explained her right to show in the park to the officers.  After a lengthy but polite discussion, they agreed street artists did not need a special permit and did indeed have the right to show in the park.  They told us that they would let the Director of Operations know why we could stay, and walked off.  But, Myer and Sandgrund didn't agree, and their word meant our rights were still on hold.

We were about half way set up when the park sergeant returned and asked us once again to stop while she called her office for clarification of the law.  We stopped.  After for a long time on hold, we were just getting word from the sergeant's supervisor.  The sergeant started to say something to Buckley when they were interrupted by Sandgrund, the Director of Park Operations (about 4:07 on the video).  The sergeant walked off to talk to her supervisor and Sandgrund laid into Buckley.  He insisted that the law enforcement officers do not know the law, and that his interpretation of the law (which prohibits artists from selling expressive matter) is correct.  He interrupted and talked over Buckley consistently, and we felt like he was a little desperate to hustle us off the land before the real legal word came down.  When Buckley disagreed, preferring to wait for the officer's decision, and questioned Sandgrund's understanding of the law, he stormed off out of earshot right up to the sergeant.

We kept waiting. Nearly two hours after we were first confronted by park officials, Sandgrund returned, indicated we could set up and display the artwork - "ok, you can do your thing" he said quickly and left.

Sandgrund, also and self-proclaimed amateur photog, then circled us conspicuously taking picture after picture of our set up.  A network of about six or seven people appeared making cell phone calls and taking turns talking to Parks officers, who at that point are trying to protect our rights against the will of the president and the director of the park. 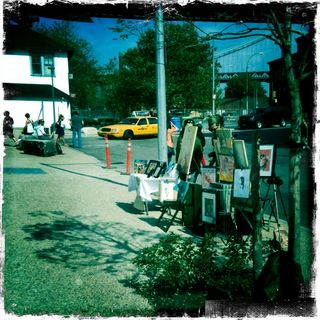 < here's our gallery finally set up.

Raymond G. Brown, Director of Special Operations, Parks Enforcement Patrol, arrived and offered expertise on the law and rights to sell artwork in public parks with Buckley.  He agreed that we had the right to do so, and advised her on best practices to comply with the law. We moved our display closer to the curb in order to comply. Brown was breath of fresh air– sincere in his duty to uphold the law and knowledgable of it.  He offered both artists his card in case they has any concerns with showing in city parks in the future. All of the Parks Enforcement Patrol staff we encountered at Brooklyn Bridge Park were professional and respectful.

Even as the security and ultimately the Dir. of Special Operations of Parks confirmed that we were good to go, the BBP people kept within earshot continuing to argue against our right to exhibit.

Regina Myer and Jeffrey Sandgrund told us over and over that they were in charge of this park, that they prohibited all vending without a permit from their corporation, and that their park was governed by their own private law which they had the authority to enforce.  Boiled down, they tried to bully us out of our rights. In this situation, a lot of people might just leave, giving up their rights, as we were tempted to do - it was scary, smacked of class issues, and it was clear we were not welcome.

Also, it was very confusing. Sandgrund firmly states that the park is state land, while his co-worker Myer calls it a "city-state entity, owned by the city right now," so why are they double-talking about the land?  Why are they dancing around the fact that Brooklyn Bridge park is a city park?  Is this a city park or not?

Fortunately, the Park Enforcement Patrol withstood the pressure to comply with the Brooklyn Bridge Park Development Corporation's very own First Amendment-less laws.  They were methodical and reasonable and, in time, we got it sorted out. But this cost us nearly three hours during the art festival, which lasted 12-6pm, and caused us a lot of stress.  Plus, what the hell.  We didn't go out there that day as a legal demonstration, but only to try to sell some art work during an art festival.  We considered leaving throughout the confrontation, only fighting on because BBPDC folks were so awful about the whole thing.  Artist Sarah Valeri, also struggling to make ends meet, had never showed her work in a park before and was blown away at the aggression toward us.  Buckley's hands were shaking so hard that she had trouble setting up the stand.

Read through the private rules of the park. They even have a rule in case your dog is in heat.  No joke.  They also appear to override high court decisions– in section one of general rules, the BBPC states:

Performances or rallies, commercial activity and distribution of commercial or non-commercial material is prohibited (except by permit).

So can they stop a poet who needs no permit, according to the Supreme Court of New York, from distributing her non-commercial poetry material?  They tried to cow us, what will they do to others?

Artists have the constitutional right to sell expressive matters in the city parks of New York. DUMBO is considered an arts neighborhood. Why should the president of what appears to be a private corporation deny the rights of artists in this park, and what else is within her power?

Here is a partial transcript of the end of the conversation between Regina Myers and E.K. Buckley:

EK Buckley: Please repeat the law that you're saying.

Regina Myer: I, I I'm not– (unintelligible) but I will send you a copy of the laws.  Give me your email address.

EKB: Well, just, would you repeat again, This... park… This–

RM -This park is a city-state entity, um, that– owned by the city right now, that has laws against that, for, that prohibit vending.  Unless it's permitted.

EKB: But we have a permit.

RM No you, you, but it has to be a permit that WE granted.

EKB: Is this a privately run park system of laws that you're imposing over the Constitution?

EKB: Well, tell me where is the link to this law that you're talking about?  Is a government office?

EKB: Is it a government law?

RM -It is not.  Brooklyn Bridge Park NYC excuse me, I said it wrong.

EKB: Brooklyn Bridge Park NYC dot org, so your private organization set up laws that are not the government law–

EKB: –that's what you're enforcing here–

EKB: –removing us, with your own laws.

EKB: Yeah.  May I have your name please?