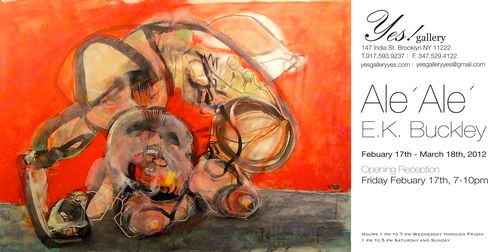 I've just signed on with Yes! Gallery and this will be my first time showing with them in New York after our first show in Miami during Art Basel in December.   I'll be there on Friday and would love to see you for a glass of wine.

Here's the write up from the gallery:

E.K. Buckley is a figurative painter working in Brooklyn whose focus is bold, eerie nudes. Her works in oil rely on stark gestures that produce poses ranging from balletic to violent. Buckley combines the heft of unrefined mark-making with elegance, creating forms with an extreme economy of illustrated description. Her subject matter is often drawn from her early training in music and literature, and her love of dance is clear in her uncanny ability to capture the body in movement. Buckley’s work in ink includes an austere series of crows– simple gestures that show her reliance on the raw mark, at times describing the bird in just a few stark and fast pen strokes. Her recent body of work includes large, distressed pieces on paper of women in mixed media. Buckley’s art could be described as Ale ́ Ale ́, a state of bursting inspiration and creativity.