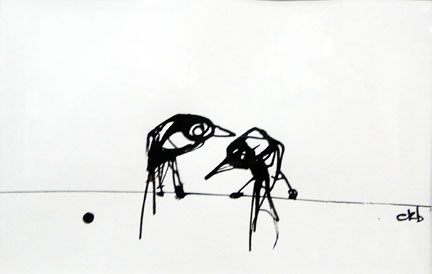 I have a show at Freddy's next week.  I'm really looking forward to hearing my cousin sing Edith Piaf songs, and I'm going to try to get Wyatt in there to hear it.  I'm not sure is babies are strictly forbidden, but if they are, he could just hang out right outside aand I'm sure he'll still be able to hear Liz belt it out.  Here's the press release:

WHAT:  Freddy's Bar presents: Crows and Nudes: Paintings and drawings by E.K. Buckley with vocal performance by soprano, Elizabeth Magnor

Freddy's Bar is proud to host the opening party for Crows and Nudes, an exhibition of paintings and drawings by E.K. Buckley on Thursday, May 10th at 7pm.  A special performance by New York soprano and Buckley’s cousin, Elizabeth Magnor will begin at 8pm.  Magnor will sing a selection of Edith Piaf songs and Mozart arias, and Buckley will exhibit her figurative oil and mixed media paintings along with a new series of ink crow drawings. Freddy's monthly Opera on Tap, a lively night of opera and booze, will begin immediately following.

E.K. Buckley is a figurative painter working in Brooklyn whose focus is bold, eerie nudes. Her works in oil rely on stark gestures that produce poses ranging from balletic to violent. Buckley combines the heft of unrefined mark-making with elegance, creating forms with an extreme economy of illustrated description. Her subject matter is often drawn from her early training in music and literature, and her love of dance is clear in her uncanny ability to capture the body in movement. Buckley’s work in ink includes an austere series of crows; simple gestures that show her reliance on the raw mark, at times describing the bird in just a few stark and fast pen strokes. Her recent body of work includes large, distressed pieces on paper of women in mixed media.

Recent to the City, Elizabeth Magnor has organized and performed in stagings of opera scenes throughout Manhattan.  She is recently back from working in Paris and will perform for the first time in Brooklyn. Buckley will have her drawing of a red-headed soprano at the show especially for Magnor.  The painter and singer are second cousins who moved to NYC from Chicago and Milwaukee.

Crows and Nudes runs from May 10th through June 11th in the Silver Room at Freddy’s, open during bar hours noon - 4am (at least) daily.  E.K. Buckley is represented by Yes! Gallery in Greenpoint.